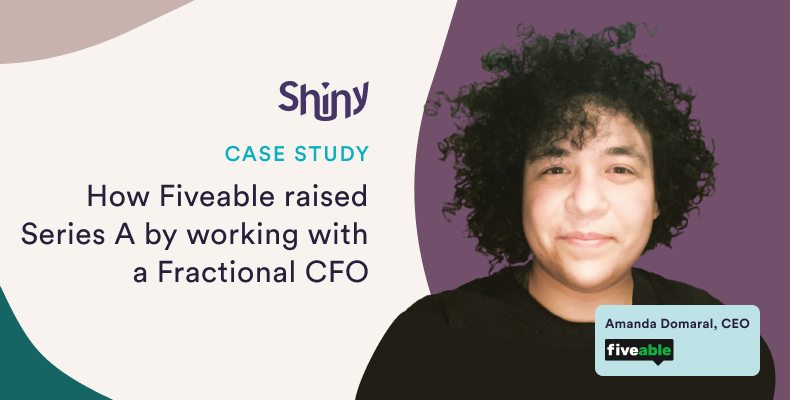 How Fiveable Raised Series A by Working With a Fractional CFO

High school and college students are experiencing more stress than ever before and a lot of it stems from a lack of motivation, accountability, and focus. Fiveable is aiming to change that with a platform that recreates the atmosphere of a “library”. These spaces combine togetherness and focus to help students get things done.

To learn more about how Shiny helped them to raise a Series A round, we talked with Amanda DoAmaral, the CEO at Fiveable

Before finding Shiny, Amanda was dealing with company financials by herself while getting some help from her accountant. While she was preparing to raise the Series A round, she was not feeling confident about showing her financials to investors because she didn’t have a background in finance and therefore her financial models were not sophisticated enough.

Amanda was working with an accountant, but she felt that she was not getting updates on the company’s financials and she had to figure things out herself on a regular basis. She knew that if she could hire someone to help with the financial model, she could focus on her strength of storytelling and they would be more likely to raise a successful round. To summarize, here are the challenges Amanda faced:

Amanda tried to solve the problem by working more closely with her accountant, but her accountant didn’t have enough experience with startups and she wanted to have someone who could support Fiveable as a part of the team. This is when she found Shiny to hire a fractional CFO who could help her to organize her finances and join the team for the long-term.

When we asked Amanda why she needed a fractional CFO, this is what she said;

“ I didn’t want to work with someone who was going to make me feel inadequate for my gaps in financial modeling. I needed to be able to ask a lot of questions and learn alongside them. Ideally, they would do their job and be the expert, but take me along for the ride”, Amanda told us.

Hiring through Shiny allowed Amanda to save a lot of time while hiring this person because she did not have to do job postings and interviews by herself. She had more time to focus on her business while Shiny did the candidate selection process for her.

Here are the results Amanda has seen since working with Shiny:

“He has a great 1-1 relationship with the leadership team. He comes to our company retreats, which is very cool. He’s been a really good partner in this. He cares about the company, and he’s a core part of the company.”

Hire a Fractional CFO to take your company’s finances to the next level, just like Fiveable did. Use the Shiny marketplace to get matched to the right Fractional CFO for you.